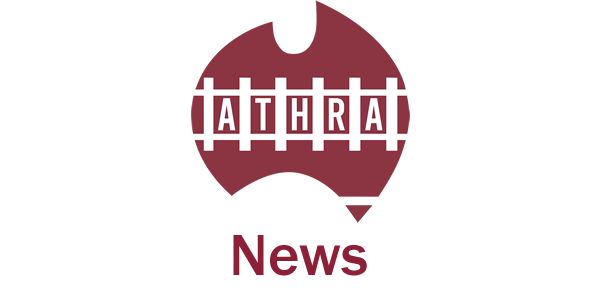 At its November meeting, ATHRA welcomed the following new members:

The group met in early October and confirmed its terms of reference, and discussed supply issues in Western Australia. On advice it was agreed that the supply coal to WA T&H would be assured until 2030.

The CWG identified that a survey of members would assist greatly by identifying possible issues and should gather information including:

The CWG aims to meet once a month.

During the month of September 2 more members have making the switch to the ATHRA/Marsh Public Liability Insurance (PLI) and 2 have taken Volunteers Insurance. During October 2 additional organisations have applied for PLI.

To date the ATHRA/Marsh insurance policies has saved our members well over $95500 (please note that this is an estimate as some members have not advised the premiums of their previous insurer).

To date we have approx. 93.64% of the Public Liability Insurance premium pool covered and we still have the November renewals to go plus we will pick up some additional coverage for the secondary layer and some additional members that are swapping over in 2023. Marsh, our insurance brokers, are confident we will reach the minimum premium pool.

As for Voluntary Workers Insurance the statistic are:-

With respect for those groups requiring $50M cover, more groups have come forward wanting this level of cover which now sees us being able to provide very good terms for members. Several have already taken up the offer.

Rollingstock Insurance continues to be a huge bug bear for us and there is no further update to date.

In relation to incentives/renewal discounts – our insurer Canopius has advised that will review each account and if there are no changes to turnover and activities, we can expect to get same premium as last year. In this market, rollover on premium from last year is a great result especially when the minimum market increase is 10%-15%.

The NTC – RSNL Maintenance Advisory Group, meets on a regular basis to discuss issues and where appropriate recommend changes to the Rail Safety National Law. In May 2022, it recommended changes which have been prepared for ministerial approval by the State & Federal Transport Ministers, and subsequently submitted for parliamentary approval. See RSNL Advisory Group – 17 May 2022 documents:

ATHRA is seeking input from its members on RSNL issues they may be experiencing, for the ATHRA board to consider and develop a submission. Please contact accreditation@athra.au

The NTC — RHAG met in September 2022, and subsequently released for public consultation:

Consultation will conclude on Monday 12 December 2022, after which the revised Standard will be prepared for ministerial approval, expected in June 2023.

ATHRA is seeking T&H people who can represent it in the consultation phase:

Can your organisation nominate any person within the T&H sector that could contribute and would like to participate in one of these groups? Please contact Peter Anderson accreditation@athra.au

The following standard is open for public consultation:

NSW coordinator Daniel Page plans to convene a bimonthly or quarterly meeting of NSW Tourist and Heritage Organisations, starting in the new year. We see a typical agenda as:

The first Queensland working group will kick off in December.
Issues raised across the state relate to:

Members discussed the relevant process for training steam engine crew, discussions are underway with SafeWorkSA. The group is seeking a Registered Training Organisation to deliver High Risk Work Licence BA (Advanced Boiler Operation) training in 2023. They hope that ultimately, demonstration of validity and capacity of ATHRA drivers’ qualifications should be used as lever to exert pressure on SafeWorkSA to consider exemptions for HRWL BA/BS in the state.

The National Rail Museum reports that patronage is back to pre COVID levels and that the Semaphore Railway for the 2022/23 season (commenced 1 Oct) is already running above previous record.

The Pichi Richi Railway Preservation Society season finished in November and they have again carried over 10,000 passengers. Social distancing requirements were finally removed by the SA Govt in late September, so they are back to normal carrying capacity.

One of the State’s oldest operators had celebrated a significant anniversary milestone with a gala day of train running, traction engine performance, model railway, music and other entertainment, all of which drew a well-pleased large crowd. Another early-formed organisation is preparing to do similar things in 2023. All members throughout the State are continuing to receive good turnovers of visitors and improved income.

New organisation RTHV (Railway & Tramway Heritage Victoria) has been formed, and held its third formal mtg in October with first director elections nearing conclusion. It has registered an ABN and its Not For Profit and Charity status is confirmed. Steve Strangward (ATHRA) and Mal Rowe (COTMA) have been co-opted as directors to the board. Puffing Billy Railway is assisting in establishing IT systems.
 WA

Steam Operations are almost over for 2022 in WA, with Hotham Valley running its last Steam Ranger services on November 8, and Rail Heritage WA steaming the Leschenault Lady on 24 October. This latter event marked Rail Heritage WA’s first passenger-hauling operation in at least 20 years.

The final steaming for the year on 27 November celebrated the 75th anniversary of the Australind passenger train service, which has run between Perth and Bunbury in the South-West of WA since 1947.